Dhoni lead with Modesty and Example !

Dhoni, A man of sheer modesty, a leader who lead by example and a great captain who has bags of milestones has stepped down as captain at the helm right time. There is no dearth of doubt that any body in cricket fraternity would ever debate his legacy !!! He is the Greatest captain ever and will be in times to come.

Giving up captaincy for team's future is a small sacrifice for a man who has always come late in batting order in entire career for the team. Now Virat would lead the team in Champions Trophy and world cup as well. Probably Dhoni was knowing the "best time" had talked at lengths with the Chief selector MSK Prasad during a semi final match in Ranji Trophy and handed over the baton to the man who is leading in best fashion !!! It may be his mistake of his life as he would hardly find his place on regular basis in the limited overs as well.

Cricket is the game of uncertainty so is the captaincy in India. His mindset is not of a typical Indian player who would struggle to hang his boots. Let the time come and he would do so and people would be just guessing...Oh it was his day.


Dhoni had given up the Test captaincy in December 2014 and had uttered that let the time come I would take a call. Probably he is the best perso who knows his best...may be the gambling of handing the ball to Joginder Sharma in 2007 T-20 world cup or taking this decision.

When I was just going through some stats came to know that Dhoni is also the only captain to have led India to ODI and T20I series wins in Australia, and an ODI series win in New Zealand. He is also the only man to win all 3 of the ICC Cricket World Cup, ICC World Twenty20, and ICC Champions Trophy as captain!

He would be remembered for his stats and record and so many trophies and one more thing for collecting the middle stumps. Probably the time would come when i would be able to pen down something on this habit and putting a fielder on leg gully that was his master stroke to get a wicket !

It was March 31, 2016 when MSD shared a banter in his own typical style with a reporter who asked him about retirement, after India v West  Indies, World T20 2016, semi-final at Mumbai. No body would be thinking that the decision would come so quickly. We Indians  have tendency to something more from somebody but he has given his all to the service of his nation. He is a true champion who rose from a very small town and ruled the second religion of India for so long. The captaincy takes a heavy toll on the beard as it was becoming grey two years back and virat has right now. Hope Virat would take this load to be the best in all formats! Many Memories Many emotions for which he will be cherished ! 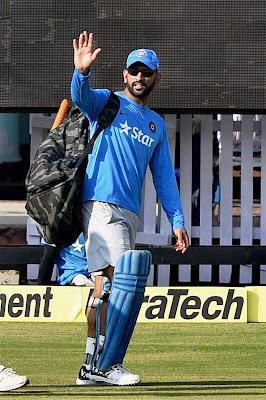 There are some If and buts to his life kit as well but this is not the right time. As an ardent fan of cricket I wish him the luck and good family life post this captain era.
Posted by Unknown at 11:27 AM